The Perceptions of Pregnancy blog, like the Researchers’ Network, aims to reach beyond boundaries and borders, and to facilitate an international and interdisciplinary conversation on pregnancy and its associated bodily and emotional experiences from the medieval to the modern. Today’s post is contributed by Victoria Leonard and Laurence Totelin on historical insights into Hyperemesis gravidarum.

Hyperemesis gravidarum… an ugly name for an even uglier disease, which has received much media attention recently. We are not going to add to the mass of comments on that particularly high profile case. What the royal case has done, however, is give visibility to a disease that is largely invisible, and has been so throughout history. There is very little to be read on nausea and sickness in pregnancy in ancient sources – our periods of interests cover the long time span from the fifth century BCE to the fifth century CE. Medical writers, male for the immense majority, paid very little attention to vomiting in pregnancy, usually only mentioning it very briefly. We have, however, one extraordinary ancient source on acute ‘morning’ sickness. It comes from the accounts of the miracles of St Stephen, attributed to St Augustine (but clearly not by him). This is how the story starts:

There was a Carthaginian lady, of noble descent, even nobler in her faith in Christ, named Megetia, rich in the world, even richer in God. Her Christian mother was named Vitula, but her husband, her father-in-law and her father were pagans. She was pregnant, four months since conception. As she was affected with nausea and retching, she suffered from shaking of the stomach, distention of the mouth, vomiting, bad health and illness, so much so that, I do not know how, a paralysis ensued. Just as her teeth and windpipes came out of their sockets, she was no longer able to close her broken mouth, nor could she accomplish the usual and simple movements of the palate and tongue in order either to send something out of the mouth or take something into the mouth. This pious and chaste woman gained an appearance that was deformed and repulsive, and she had stains and blemishes [sc. pregnancy mask] marked on a part of the body where they cannot be hidden: indeed they were on her face, of which someone once said ‘the forehead holds forth people, and it cannot be covered without shame’. De miraculis sancti Stephani 2.1

The story is very long, but in brief, this is what happens to Megetia. She is treated by numerous physicians, to no avail. She loses her baby in the sixth month, but is so weak that the miscarriage does not take its normal course. At the very end of the seventh month, her mother Vitula decides to go to Uzalis (near Carthage) to pray at the sanctuary of St Stephen. She returns to Carthage with some sacred oil that saves her daughter from death but not from the paralysis that affects her mouth. Again, the best physicians (one of whom is called Felix) are called, but none can help. When Megetia has regained enough strength (the story states that by then Megetia has been ill for a year and several months), she and Vitula make their way to the sanctuary of St Stephen. There, after much wailing over the relics of the Saint, Megetia falls asleep and is visited in her dream by a snake, representing evil, which she manages to slay, and by a ‘spiritual physician’ who informs her that she has to cure her eyes rather than her mouth. Awake, she discusses her dream with wise women and realises that she needs to confess a sin (we are not told what that is): the eyes she needs to treat are the eyes of the soul. In tears over the relics of the Saint, she feels something like a hand that resets her jaw. She goes back to Carthage where she is met joyfully by her family (who all convert in the end) and friends. 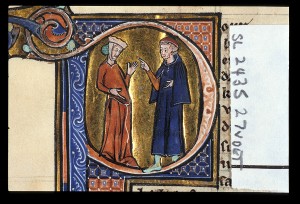 This particularly gruesome tale has a strong moral significance: that a healthy body relies on a mind free of sin. Even the pagan beliefs of Megetia’s husband, father-in-law and her father underlie Megetia’s illness, which warrants a spiritual rather than physical cure. Megetia’s miraculous healing, thanks to the relics of St Stephen, is one of many miracles that were recorded as part of a rapidly growing cult of the saint in North Africa in the first centuries of the Common Era, following the distribution of Stephen’s relics from the Holy Land. Such stories ensured that Christians turned to their patron saint for help, protection or medical treatment rather than seeking a non-Christian alternate.

While there are many usual ‘motifs’ in the story of Megetia (the wailing on the tomb; the dream involving the spiritual healer and the snake; the realisation that the real illness is one of the soul rather than one of the body), there are also some elements that feel ‘lived’. This is a painfully realistic story of how dreadful pregnancy can be, so painful in fact that miscarriage, when it finally occurs, is welcomed as a relief. Although the story’s timeframe is rather unclear, it is certain that Megetia was affected with pregnancy-related ailments for well over a year. Here is a rare historical acknowledgement that peri-natal traumas, be they physical or mental, can take a very long time to heal.

Victoria Leonard is a doctoral researcher in Ancient History at Cardiff University. She specialises in the study of religion in late antiquity, and has a growing interest in the ancient medical world, particularly bodily functions.

Laurence Totelin is a Lecturer in Ancient History at Cardiff University. She specialises in the history of Greek and Roman science and medicine, with a special focus on gynaecology.