The Perceptions of Pregnancy blog, like the Researchers’ Network, aims to reach beyond boundaries and borders, and to facilitate an international and interdisciplinary conversation on pregnancy and its associated bodily and emotional experiences from the earliest times to the present day. Our latest post, which explores nineteenth-century abortion, is contributed by Professor Owen Davies. This is our last post of 2014, and we will be back on 12 January. Thank you to our contributors, members and readers who have made our first year so successful and enjoyable.

Cunning-folk as abortionists in nineteenth-century England

In 1978 one of the pioneers of historical research on abortion practices, Angus McLaren, observed, ‘the development of new methods of birth control and the controversy over their use at the turn of the [nineteenth] century took place in the presence of a reality not yet fully perceived by historians – a widespread tradition of abortion based on folk remedies.’[1] The point still holds today. There is a general awareness of the role of folk remedies and practitioners in abortion and birth control, but very little detailed study. The sources are a problem, with the topic avoided or underrepresented in the volumes of material collected by antiquarians and folklorists.[2] We have very little autobiographical material. Poor working class women did not write in diaries about their birth control strategies. The voices that clamour in the sources are those that condemned the illegal practice.

Most information we have about the performance of abortions comes from murder and manslaughter trials and inquests, and the newspapers that reported on such sensitive but sensationally tragic news. In other words, we generally only hear about instances of abortion when they went badly wrong, and ‘enceinte’ women died or suffered terrible consequences through botched operations or self-administration of abortifacients. 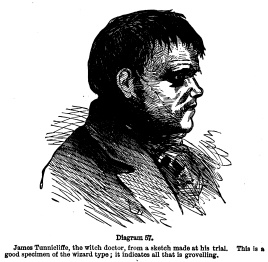 The criminal archive reveals a wide range of women and men offering abortion services in the nineteenth century, from qualified surgeons to ostlers. But midwives, herbalists and druggists were singled out by the medical profession as being at the heart of the ‘criminal still-birth business’. Within the broad category of herbalist we find that some magical practitioners known variously as cunning-folk, wise-men, wise-women, conjurors or wizards, offered abortions amongst their numerous other magical services – dealing with witches, detecting thieves and stolen property, providing protective charms, telling fortunes and provoking love.

One such operator was the despicable and manipulative Leeds cunning-man, Isaac Rushworth.[3] In the spring of 1856, Ritty Littlewood, the 25-year-old daughter of a cordwainer, was advised to consult Rushworth regarding her ill health. Rushworth ‘read her planet’ and concluded she was bewitched. He provided her with medicine and written charms, but suggested she would never get better unless she had sex with him. She acquiesced and became pregnant. Rushworth provided her with an abortifacient that proved successful. Having drained her of all her savings and aborted her foetus, Rushworth then abandoned Ritty. She reported him to the police and he was sent to prison, but the mental and physical stress drove her insane. After the trial she was taken to Wakefield asylum. Her case notes record that, when not restrained, she clawed and scratched herself, that she had delusion that she was going to be hanged, and tried to hang herself.[4]

While Rushworth supplied an abortifacient to serve his own cruel ends, some cunning-folk clearly provided a regular service. The Norwich cunning woman Sarah Whisker was transported for life in 1846 for attempting to procure an abortion for a servant named Frances Bailey. Bailey did not go to Whisker requesting an abortion directly. Her pregnant condition emerged during a fortune-telling consultation. Whisker then suggested that if she returned in a few days’ time she would give her something that would ‘do her good and not interfere with her work’. Bailey duly returned and was supplied with a powder and liquid. After taking it, she became violently ill and resorted to a doctor. It transpired in court that the medicine Whisker provided contained white hellebore. A local chemist testified that he had frequently supplied Whisker with small quantities of the plant.

White hellebore was one of several well-known herbal abortificents or emmenagogues (substances that provoke menstruation) that could easily be obtained from druggists and chemists shops, or from gardens and the countryside. Rushworth made Ritty Littlewood drink a decoction of ‘Seed of paradise’, in other words cardamom. There was also savin (juniper), which was also known in some parts of the country as ‘bastard killer’, powdered bay berries, yew berries, meadow rue, pennyroyal, feverfew (also known as ‘kill-bastard’), and tansy.

Herbalism was a core business for cunning-folk as herbs were used in charms, divination and astrological medicine, as well as for mundane healing. The herbalists’ trade was also a good cover for the illicit practice of magic and fortune-telling. Quite a few of the high street herbalists recorded in trade directories turn out to be cunning-folk in all but name.[5] One such was Robert Slade Colmer of Yeovil, Somerset.

Colmer was a self-educate student of astrology and medicine and opted to use operative rather than herbal methods when Elizabeth Fox, a local clergyman’s servant, came to see him in great pain in 1863. She was four or five months pregnant and had apparently tried various drugs and herbs but to no avail. She was put to bed but died shortly after of a ruptured womb. Colmer was accused of using a sharp instrument to cause abortion, and was charged with manslaughter. He admitted burning the foetus and afterbirth around the time of death but claimed she had miscarried. ‘We are not in the habit of having in young women under similar circumstances,’ Colmer told the court. Seventeen years later, he and his wife were sentenced to hang for wilful murder after the same technique led to the death of a widow, Mary Budge. We generally hear only of the tragedies, of course, but how many successful abortions had Colmer and his wife achieved over the years? How many women had they helped out of a terrible social situation? Questions we cannot answer but need to reflect upon when examining such trial cases.

The evidence suggests that cunning-folk did not use magic to try and procure abortions. Then again the absence of evidence is not necessarily evidence of absence. The fact that we have considerable source material for the use of magical protection in pregnancy and childbirth but practically nothing about magical abortion, may be, in part, a matter of collection bias and lack of reporting. The same lack of evidence raises the unanswerable question of whether pregnant women went to cunning-folk because they hoped a magical solution could be found, only to be treated with the mundane knitting needle and toxic quantities of herbs.

Owen Davies is Professor of Social History, University of Hertfordshire. He has published widely on witchcraft, magic and popular medicine.