The Perceptions of Pregnancy blog, like the Researchers’ Network, aims to reach beyond boundaries and borders, and to facilitate an international and interdisciplinary conversation on pregnancy and its associated bodily and emotional experiences from the earliest times to the present day. The latest blog post is contributed by Ciara Meehan and explores the ill-fated attempt to legalise the sale of contraception in Ireland in the early 1970s. 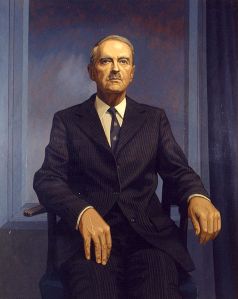 Portrait of Liam Cosgrave, on display at Leinster House.

In 1974 Irish Taoiseach (Prime Minister) Liam Cosgrave took the most unusual decision to vote against his own government. His Minister for Justice, Patrick Cooney, had introduced legislation designed to amend the Criminal Law Amendment Act, 1935, under which the importation, display or sale of contraceptives was illegal in Ireland. Cosgrave, however, was a devout Catholic, and Pope Paul VI had re-affirmed the Church’s opposition to artificial contraception when he issued the encyclical Humanae Vitae in July 1968. Cosgrave did not pre-warn any members of his Fine Gael party, nor did he alert his coalition partners in Labour. As the whip had been removed and a free vote allowed, he was not obliged to inform his colleagues. But he was not just an ordinary TD (MP); as the leader of the government, there were certain expectations. As John Bruton (Taoiseach, 1994-97) — normally a supporter of Cosgrave — put it, ‘it was quite shocking … It just wasn’t good leadership’.[1]

The legislation was prepared by the Minister for Justice, and not, as perhaps one might expect, by the Minister for Health. Contraception was very much discussed in legal terms, and it was not until the 1985 Family Planning Act was introduced that it was considered a health matter. Moreover, the 1974 legislation was not progressive. It was not a question of making contraceptives available, but rather of limiting their sale to married couples. During the debate, concern was voiced that the availability of contraception would lead to a rise in promiscuity and would also result in young people entering into sexual relationships. The conservative nature of the Importation, Sale and Manufacture of Contraceptives Bill reflected an on-going reluctance by Irish political parties to formulate progressive policy in the area of morality; the outgoing Fianna Fáil government (which lost power after the 1973 general election) had also been unwilling to legislate on the matter. Patrick Cooney’s proposed legislation attracted the attention of the New York Times, which suggested that it would fail if Fianna Fáil — the main opposition — voted against it because so many on the government benches were also critical.[2] Nobody predicted, however, that the Taoiseach would contribute to the government’s defeat.

Cosgrave had presided at the cabinet meeting on 19 March when Cooney was authorised to move for leave to introduce the Bill in the Dáil (Irish parliament) and to circulate the text to TDs.[3] Recalling his decision not to confide in his colleagues, he explained that he acted on his own ‘without trying to influence how others would vote’.[4]

Often overlooked is the fact that Liam Cosgrave was not the only government member to enter the Níl (no) lobby. He was joined by his Fine Gael party colleagues Richard Burke (Minister for Government), Tom Enright, Martin Flinn, Oliver J. Flanagan, Desmond Governey and Joseph McLoughlin.  Voting with the opposition, they helped to defeat the bill by seventy-five votes to sixty-one. Labour’s Dan Spring did not travel to the parliament for the vote. He was attending a civil court case in Cork that day, but, as Stephen Collins has pointed out, many of his colleagues interpreted his absence as a political statement.[5]

The result was a blow to the government, and commentators were generally in agreement that the Fine Gael/Labour coalition would have been in serious trouble if its major opponents had not been so weak at the time.[6] But although Cosgrave’s action was surprising for a man in his position, it was not surprising for a man of his faith. Moreover, he appeared to read the public barometer. In an interview published at the start of 1974, Cosgrave had expressed the view that Irish people were ‘opposed to any form of what one calls “permissive society”’.[7] The flood of letters that reached the Department of the Taoiseach in the months after appeared to confirm this. Although the correspondence was interspersed with communications from such groups as Irish Women United (a group of women’s liberationists),[8] the majority of those letters retained supported Cosgrave’s decision, which many interpreted as a stand against the moral corruption of Irish society.[9]

As the government’s time in office was coming to a close, the Taoiseach was asked in an interview for the French newspaper Le Monde if he envisaged any contraception policy. ‘No’, was the simple reply.[10] The Fianna Fáil government elected at the 1977 general election eventually enacted legislation two years later. The party had pledged in its 1977 manifesto to ‘ensure the widest possible acceptance of positive policy for family planning and enact the necessary legislation’.[11] But given the broad opposition to the Fine Gael/Labour government’s efforts, any proposal that would have ‘the widest possible acceptance’ would have to be limited in scope. Indeed, Fianna Fáil’s legislation introduced by Charles Haughey was not designed to be a liberal measure. Rather, contraception was to be made available only to married couples with a doctor’s prescription. This restriction was eventually removed in 1985.

Ciara Meehan is the co-director of the Perceptions of Pregnancy network. She is a senior lecturer in history at the University of Hertfordshire, and the author of A Just Society for Ireland? 1964-87 (Palgrave Macmillan, 2013).

One thought on “‘It was quite shocking’: The Day the Government Leader Voted Against his Government’s Legislation on Contraception”