The Perceptions of Pregnancy blog, like the Researchers’ Network, aims to reach beyond boundaries and borders, and to facilitate an international and interdisciplinary conversation on pregnancy and its associated bodily and emotional experiences from the earliest times to the present day. This week’s post is contributed by Daphna Oren-Magidor and explores one of particular stigmas that was attached to fertility in the early modern period.

Infertility was associated with various stigmas in early modern England. Infertile women were described as manly, domineering, and overly sexual, while infertile men were effeminate and unable to control their wives. One recurring trope suggested that when a “barren” woman was suddenly cured of her infertility, it was the result of a dalliance with a man other than her husband. While it wasn’t the only view of infertile women, nor the most prominent one, it appeared in numerous poems, plays, ballads and other works, most of them satirical or comedic, but some also more serious.[i] While this trope was certainly used because it was entertaining, it also had more important implications. First, if a woman conceived after having sex with another man, then it was implied that her husband was “at fault” for the couple’s childlessness. Almost invariably, however, the women in these texts were described as “barren” themselves, and this was seen as an essential quality, one that might even be hereditary. By presenting infertility in this way, the authors who used this trope promoted the idea that infertile women were sexual and uncontrollable (hence their adultery), while at the same time suggesting that infertile men were unable to control their wives. But beyond the implications for early modern gender identities, the trope of the adulterous barren woman was used by authors of political and religious satire, in order to promote specific ideologies. It went beyond the discourse of reproduction, sexuality and gender, and into broader realms.

In the sixteenth century, anti-Catholic rhetoric sought to mock claims of miraculous healing by saints or in holy sites, and to belittle the supposed “holiness” of Catholic priests and monks. One avenue of mockery was to suggest that male clergy “cured” barren women by sleeping with them. In 1546 John Bale published an anti-monastic treatise, in which he accused monks of corruption and immorality. Among other things, Bale noted that monks and false saints “took great pains among them to make barren women fruitful,” implying, of course, their personal participation in the “cure”.[ii]

Peter Heylyn, writing about the baths at Baden in 1652, noted that “as the friars used to send men whose wives are fruitless in pilgrimage to Saint Joyce…and in the meantime to lie with their wives, so it may be with good reason thought that in a place of such liberty as this is, the lusty and young gallants that haunt this place, produce greater operation on barren women, than the waters of the bath itself.”[iii]  Heylyn used the existing anti-Catholic trope and altered it in order to criticize the licentiousness of medicinal spas. 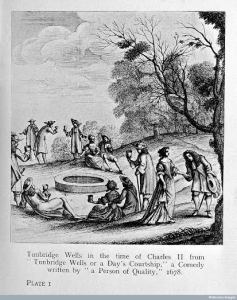 Like Heylyn, other authors used this trope to criticize the lifestyle at Bath, Tunbridge Wells and other spas.  The baths were areas where young people socialized, often without supervision, and they quickly developed a reputation for sexual scandal.[iv]  They were also associated with aristocracy, and were thus ripe for social and political satire. In a piece entitled “Upon a Lady that Went to Tunbridge Wells” (1685), John Elliot told the story of a lady who was cured of her sterility at the bath, not by the waters, but by the intervention of a “lusty cock of the game.”  Elliot advised the woman’s daughter to use the same method should the infertility prove hereditary, advice that at once suggested that barrenness was an essential quality of the wife and that the problem lay with the husband. No attempt was made to explain the contradiction.[v] Elliot was by no means alone in criticizing the licentiousness of the baths and linking the sexual activities of the bathers with the supposed cure of barren women.[vi]

The connection between infertility, infidelity, anti-Catholic sentiment and medicinal bathing is most evident in a satirical poem written during the Bed-Warming Pan scandal. The scandal revolved around James II and his second wife, Mary of Modena. Mary had a series of reproductive problems. In 1688, she announced the birth of a son, who would have been a Catholic heir to the English throne. Most famously, Mary was accused of smuggling a child into her room in a bed-warming pan and presenting it as her own.  However, another strain of criticism suggested that Mary had given birth, but the father was not James. The poem in question promoted this idea.

According to the poem, the royal family prayed to the Virgin Mary for a son. The Virgin responded by taking her own smock and asking the archangel Gabriel to carry it directly to Mary. James II was instructed to cover his wife with the virgin’s smock, and then go off to travel the land. Meanwhile, the “spirit of Love”, in the form of the papal nuncio, Count Dada, would descend from the heavens and “make her [Mary] a mother.” [vii]

James II had, in fact, been travelling while Mary was at Bath for fertility treatments, although he did visit her several times. It was presumably on one of these visits that she conceived. The author of the poem the trope of the adulterous barren woman, one which had a history in anti-Catholic rhetoric. By doing so, he presented Mary as a woman whose sexual license would lead England to Catholicism, and James as a foolish cuckold who had lost control of his wife. The link between infertility and infidelity was transformed from a titillating joke into a pointed political statement. 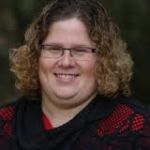 Daphna Oren-Magidor is a historian of women and the family in early modern Britain and Europe. She is currently a fellow of the Martin Buber Society of Fellows (http://buberfellows.huji.ac.il/) at the Hebrew University of Jerusalem. She is writing a book entitled Infertility in Early Modern England.

[i] This trope was not new or unique to early modern England, but this post will focus on it in the English context. Among the works that use this trope are included:  J.B. Firth and N. Erichsen, Highways and Byways in Derbyshire (Macmillan, 1905), 152; Anon, My Dog and I (Printed for F. Coles, T. Vere, J. Wright, and J. Clarke, 1675); John Lacy, The Dumb Lady, or, the Farriar Made Physician (London : Printed for Thomas Dring 1672), 31.

2 thoughts on “Infertility and Infidelity in Early Modern England”