The Perceptions of Pregnancy blog, like the Researchers’ Network, aims to reach beyond boundaries and borders, and to facilitate an international and interdisciplinary conversation on pregnancy and its associated bodily and emotional experiences from the earliest times to the present day. This week’s post, a day late because of the UK bank holiday, is contributed by Jennifer Evans and explores early modern ideas that the womb was an active agent in reproduction.

The womb in early modern medical writing was often described in contradictory terms. To underline women’s subordinate position in society the womb was described as a the passive element in the process of reproduction. Simultaneously though medical writers used language that transformed the womb into an active agent working consistently throughout conception to form a foetus. 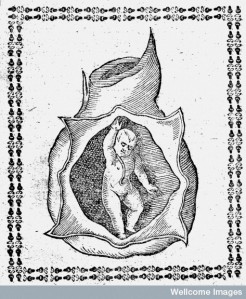 The image of the passive womb was created through the metaphor of agriculture. Many medical writers described the female generative organs in terms similar to the following: ‘The womb is that Field of Nature into which the Seed of man and woman is cast.’1. Jacob Ruff explained to readers of his sixteenth century treatise of generation that this ‘familiar example of sowing corn’ initially came from Hippocrates.2 In particular he used this language to describe the humoral conditions in the womb that would lead to infertility: ‘For if it [the man’s seed] be sown in over-cold places … or in such places where is continual snow or frost, or where the sun doth not shine, in these places, the seed or grain sown will never come to proof, nor fructify.3 This language promoted the idea that males were the active factor in generation, ploughing the female land and sowing the seeds of new life into it. In this way medical writers were able to reinforce the patriarchal hierarchy, and ameliorate anxieties about women’s reproductive potential. Certain frameworks where women produced both seed and menstrual blood, allowed for the idea that a woman, theoretically, could reproduce without any input from a man. In such an instance men became superfluous to reproduction, which did not sit well in an inherently patriarchal society.

Despite this desire to reassert men’s centrality to reproduction, medical writers frequently described the womb in terms of activity. It desired, attracted, mixed and mingled seed, nurturing it into a foetus. Patricia Crawford noted in her work how various texts related that the womb snatched a man’s seed after ejaculation and shut tight to prevent its loss.4   A posthumous seventeenth century edition of Ambrose Paré’s medical works used relatively subtle language it express this: ‘The womb allure’s or draw’s the masculine seed into it self by the mouth thereof, and it receiv’s the woman’s seed by the horns from the spermatick vessels which com from the testicles into the hollowness or concavitie of the womb’.5 Robert Barret’s Companion for Midwives  from 1699 used similarly subtle language, yet made it clear that the womb had agency:

The chief uses of the matrix are to draw the seed to it, to mingle it with blood, to contain it, to excite its faculties and spirits.6

Even Jane Sharp who had carefully positioned the womb as a field, as the quotation that opened this post demonstrates, explained that the womb had a magnetic quality to draw the seed to it.7 In these descriptions the womb was in constant motion from the moment of male ejaculation to form and substantiate the growing foetus.

Contradictory descriptions of women’s reproductive bodies were thus produced and reproduced across the seventeenth century. They reveal that there was much still to discover about the womb in this era. Despite the discoveries of Gabriele Falloppio (the fallopian tubes), William Harvey (one of the men to discover eggs), and others the female reproductive body remained mysterious. It was unclear until the 1670s what each sex contributed to the process of generation, and it was unclear which sex was more important to the process. It was therefore possible to simultaneously imagine the female body as subordinate and passive in the process, and as actively working towards producing progeny.

6. Robert Barret, A Companion For Midwives, Child- Bearing Women, and Nurses. Directing them how to Perform their Respective Offices … (London, 1699), p. 88.