The Perceptions of Pregnancy blog, like the Researchers’ Network, aims to reach beyond boundaries and borders, and to facilitate an international and interdisciplinary conversation on pregnancy and its associated bodily and emotional experiences from the earliest times to the present day. This week’s post is contributed by Helen Brooks and examines the pregnant eighteenth-century actress.

Writing in 1802 that a woman’s duties as a mother began ‘not only from the birth of her child, but even from the moment of its origin’ Christian Struve voiced the opinion of many an eighteenth-century commentator.[i] Maternal conduct literature often placed as much emphasis on the months preceding the child’s birth as it did on those following it. Women were advised to carefully moderate their levels of physical activity, and to avoid dancing, riding, or even walking. Yet at the same point they were warned of the dangers of idleness, indolence or ‘excessive effeminacy’.[ii] The ‘fatiguing dissipations’ of the bon ton also presented risks, whilst anything which might be described as ‘tumultuous pleasures, violent passions’ or ‘an irregular life’  could all lead to serious harm or miscarriage.[iii]

So where did this leave working actresses? Certainly they did not conform to these idealized notions of how the expectant mother should behave. Quite the reverse. Working long days and late into the night in the stifling environment of the theatre, travelling long distances, and undertaking work which was physically as well as emotionally strenuous, pregnant actresses, if prenatal conduct literature was to be believed, risked both their own health and more importantly, that of their unborn child.

There is no evidence, however, that their failures to conform to idealized maternal behaviour concerned either actresses or their audiences. Spectators were not only used to seeing women working until around the eighth month of pregnancy, but also seem to have accepted it without question. And where there were comments on pregnant actresses performing it was largely out of concern over their being be in pain or discomfort.  As the Morning Chronicle wrote of Isabella Mattocks when she performed Lucinda in September 1773:

the painful sensations the audience must feel on such an actress’s account from an idea of her being uneasy; […this] was frequently the case with us yesterday evening, when we thought we discovered in Mrs Mattocks’s countenance at different times strong tokens of pain and illness’[iv] 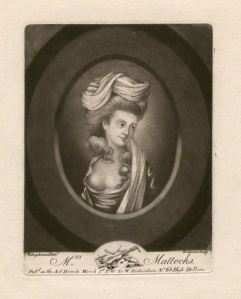 Continuing by blaming the managers for not letting Mattocks rest until she had finished lying-in this commentator allowed the actress herself no agency over her working decisions: a lack of agency echoed by many historians’ assumptions that actresses were often forced, whether by managers or financial necessity, to work throughout their pregnancies, even to the point of giving birth on stage. Yet whilst lower-tier actresses may well have felt the pressure to continue earning, anecdotal evidence and an examination of actresses’ patterns of leave prior to giving birth offers a somewhat different picture. Some managers appear to have been understanding of pregnant actresses’ needs. David Garrick, for example, allowed a young Sarah Siddons time to recover before she made her London debut in 1774, while when a Dublin manager (incorrectly) thought Dora Jordan was pregnant in 1809 he refused to let her play in the afterpiece. The touring actress Ann Holbrook also indicated in her memoirs, that there was some provision made for actresses continuing to be paid during their confinement. And for many actresses this confinement took place at the same time as for other women: one month prior to their expected due date. Dora Jordan, for example, gave her last performance approximately six weeks before she gave birth to both her daughters Dodee and Sophia, and ten weeks prior to giving birth to her son Henry and daughter Maria. And she was not alone. At the start of her career Mary Robinson stopped work six weeks before giving birth to Sophia in 1777, whilst the minor actress Mary Wrighten took three months off prior to giving birth to twin girls in September 1778. Elisabeth Bannister probably took about a month off prior to giving birth to her daughter in 1784, and a little less – 20 days – when she gave birth to another daughter a year later.  And when actresses like Sarah Siddons did go into labour on stage, or gave birth not long after being confined, it is far more likely, at a time when early signs of pregnancy were often unclear, that they mistimed their due dates than that they were determined to work up until the point of giving birth.

Overall much greater analysis is needed of actresses’ patterns of absence both during and after birth.  What can be said however is that, like women today, actresses’ decisions about how to approach balancing motherhood would have been based on a complex mix of professional, personal, health, financial and ideological factors.

Helen Brooks is Senior Lecturer in Drama at the University of Kent. She is the author of Actresses, Gender and the Eighteenth-Century Stage (Palgrave, 2015) and Associate Editor (Drama) of the Wiley Encyclopedia of British Literature: 1660-1789. She has published on areas including the relationship between actresses’ work and their choices in marriage (ECL, 2011); female rhetorical performance (STP 2011); and women as theatre managers (Engel, 2009 and STP, 2008). In 2013 she won the Southeastern Association of Eighteenth Century Studies, Annibel Jenkins prize for her essay ‘One entire nation of actors and actresses’: Reconsidering the Relationship of Public and Private Theatricals’, Nineteenth-Century Theatre and Film, Special Issue: Amateur Theatre Studies, 38.2 (2011).

[i] Christian Augustus Struve, A Familiar View of the Domestic Education of Children During the Early Period of Their Lives …To Which Are Prefixed Three Introductory Lectures on the Same Subject by a. F. M. Willich, M. D. (London: Murray and Highley, 1802), 156-157.

[ii] See for warning of effeminacy and encouragement of exercise Struve, A Familiar View of the Domestic Education of Children, 164-5, Thomas Bull, Hints to Mothers, for the Management of Health During the Period of Pregnancy, (London: Longman, Orme, Brown, Green & Longhams, 1837), 22, 103.

[iii] Priscilla Wakefield, Reflections on the Present Condition of the Female Sex; With Suggestions for Its Improvement (London: printed for J. Johnson; and Darton and Harvey, 1798), 15.