The Perceptions of Pregnancy blog, like the Researchers’ Network, aims to reach beyond boundaries and borders, and to facilitate an international and interdisciplinary conversation on pregnancy and its associated bodily and emotional experiences from the earliest times to the present day. Today’s post from Ciara Meehan explores women’s magazines as sources of information about pregnancy in a pre-digital age.

When I was fifteen, I had intercourse. I’m nineteen now and though I get periods regularly I wonder if I could become pregnant as a result of what happened then.[1]

When I was twelve years old my brother and I did something very wrong. Only a year later did I realise how wrong it was. That is five years ago now and I never told my mother. I have regular periods, but fear that I might become pregnant as a result of what happened. I have symptoms which worry me greatly … Do you think I might have cancer?[2]

I am sixteen and something wrong happened me when I was about twelve. I didn’t know then that it was wrong and now I worry, as my ankles swell and I notice my eyes get black. I have regular periods, but could I have some infection? I’m afraid to tell my mother. Could I be pregnant?[3]

These three letters, written by teenagers who feared pregnancy years after intercourse, are deeply disturbing. They reveal a complete lack of understanding about how pregnancy occurs and the length of the gestation period (while also implying, in one case at least, that sexual abuse took place). Letters about becoming pregnant after a significant length of time are not a regular occurrence in the Irish women’s magazines of the 1960s that I have been examining for my current project, but they do speak to a bigger, more frequent issue – complete bewilderment about pregnancy.

Unnecessary stress and worry, such as that experienced by the seventeen-year-old who worried that she might have cancer, was the result of boys and girls entering adulthood with a hazy knowledge of the facts of life. Letters to the advice columnists in the magazines reveal that girls were concerned about pregnancy resulting from a whole range of activities that did not result in intercourse, including close dancing, passionate or French kissing, and masturbation. But it was not just teenagers and younger adults who benefited from or turned to the magazines for advice and guidance. ‘Is it possible to become pregnant when intercourse takes place at the beginning or up to the third day of menstruation?’, enquired one forty-five-year-old woman.[4]

The internet age has placed a wealth of information at our fingertips. Though not always accurate, it does at least provide a discreet location for us to search advice on the issues troubling us. Google’s intuitive search engine anticipates completing ‘Am I’ with ‘pregnant’, indicating the popularity of this as a search term. Women’s magazines were arguably an earlier version of the Google search engine, and they potentially offered readers, like the three quoted above, some reassurance and comfort when they had no one else to turn to.

While advice columnists did not have the space to provide detailed information, regular readers could piece together vital information. Instances of women clipping information from the magazines meant that some were creating their own home-versions of advice manuals. In addition to the advice columns, the magazines also sometimes carried health columns that provided further guidance on topics such as menstruation and fertility. Woman’s Choice, for example, ran a series of sex education features in November and December 1968.

Angela Macnamara was the advice columnist in Woman’s Way in the 1960s.

If a reader could not find the answer to their specific question, they could outline their circumstances in a letter to the magazine in the hope of getting a response. A nineteen-year-old woman who was due to be married asked Sheila Collins to explain as plainly as possible what coitus interruptus and premature ejaculation – words that she had read in a British magazine – meant. Collins obliged in plain English.[5] There is also a sense of confidentiality about the letters page. The anonymity of writing a letter to someone the author has never met relieves the anxiety of speaking face-to-face about their problem. Having a one-to-one conversation in a public forum meant that the general reader could also gain from the query. By ‘sharing’ in or relating to experiences, women were able to reassure themselves of their own normality, thereby lessening their anxiety. In a society where sex was still not a comfortable topic to discuss as a formal level and where shared information between friends was not always accurate, such forums played an important role.

Granted, there were a variety of educational books available, including My Dear Daughter, Towards Maturity, Life and Our Children or Girls Growing Up. The problem, of course, was that such books were not free and teenagers especially may not have had the money for – or the inclination to spend their pocket money on – such publications. Even if they did, they still had to undertake the very public act of going to a bookstore, selecting the title from the shelves, and paying for it at the till. The potential embarrassment involved in such a transaction may have prevented the more shy from doing so. Moreover, for those living in rural Ireland, access to a well-stocked bookshop was not always convenient. Even if teenagers did manage to source such reading, not all found them particularly insightful, 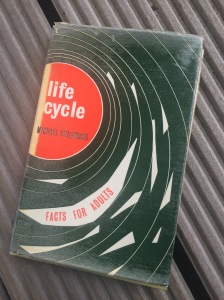 I am really ignorant about the facts of life. I am 17, and afraid to go to a dance, or make a date, as I don’t know how a person could become pregnant. This is my main problem, and even though I have read My Dear Daughter (books 1 & 2), I find there is not much about it there.[6]

Life Cycle, which was aimed specifically at married couples, was published in 1963. It was the first sex education book written by an Irish author and produced by an Irish publisher. Although the book had a very generic cover and a vague sounding name, as was the case with the facts of life guides for teenagers, it was still a sex education book and the purchase of it from a bookseller was tantamount to an admission of physical intimacy.

In comparison, magazines were more affordable, and any potential embarrassment associated with buying one was significantly minimised. Additionally, they were more easily sourced. Even if a teenager did not have the pocket money to purchase a magazine, there was a strong possibility – particularly with Woman’s Way due to its impressive circulation figures – that there would be a copy in the family home. That letters enquiring about sex and pregnancy continued with frequency is a clear indication that magazines were not an adequate substitute for proper instruction, but before the introduction of formal, state-led sex education in 1997, they at least provided one source of reliable information.

Ciara Meehan is Head of History at the University of Hertfordshire. She is currently finishing a book on prescriptive literature, women’s magazines and everyday life in 1960s Ireland; you can find out more about this on her blog. She is also the co-director of the Perceptions of Pregnancy network. You can find her on twitter at @CA_Meehan.

One thought on “‘Am I Pregnant?’: Women’s Magazines as a Source of Information”