The Perceptions of Pregnancy blog, like the Researchers’ Network, aims to reach beyond boundaries and borders, and to facilitate an international and interdisciplinary conversation on pregnancy and its associated bodily and emotional experiences from the earliest times to the present day. This week, Sara Read reviews a new memoir by Adam Kay.

This book is record of life on the wards for a newly qualified doctor in the first decade of the twenty-first century. When it came time to specialise the author Adam Kay decided upon obstetrics and gynaecology, and so the memoir provides a doctor’s eye view of the path from junior doctor to senior registrar helping women deliver babies. It deals with many matter-of-fact details of delivery that are sometimes glossed over even in antenatal classes, such as that most women will open their bowels during delivery due to pressure and that it is to be expected.

As someone who works on the presentation of reproduction in historical literature, the patients and their complications are naturally the same ones I’ve seen described in the many midwifery texts printed in the seventeenth century, for example. While conditions like placenta previa or placental abruption were automatically death sentences for mother and child in pre-modern medicine, in this memoir with adequate screening the outcome is normally –but as this memoir makes clear, not always- very different and happier. One continuity that is striking is the way that the first response to many medical emergencies seems to be the setting up of a drip to keep up the patients’ fluids, and of course this need to keep fluid levels balanced is one which all pre-modern medical practitioners, schooled in humoral medicine would appreciate. 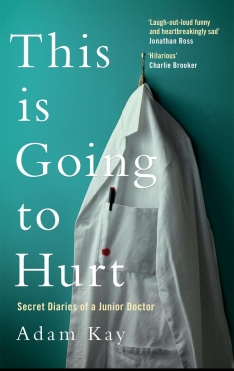 One anecdote caught my attention because the circumstances resonated amusingly with a poem by John Wilmot, earl of Rochester published in 1680. In the poem ‘By All Love’s Soft, Yet Mighty Powers’ the speaker advises a prostitute that men do not like sex during a menstrual period: ‘It is a thing unfit, / That men should fuck in time of flowers’. The speaker therefore suggests that she should insert a sponge to soak up the flow and so not impede her business. Kay describes a consultation with a sex worker who had come to the same conclusion and fashioned a sponge from a Fire Man Sam children’s bath sponge. Unfortunately the woman left the sponge in situ for three months meaning it required medical intervention to retrieve it.

The book does not shy away from the politics of the NHS and ends with an open letter to the Heath Secretary Jeremy Hunt. Throughout, the book is an eye-opener in terms of how the health service treated its doctors in the early 2000s. The lack of consideration for any notion that doctors have a right to a personal life is writ large amongst the anecdotes and case stories: tales of cancelled dinners, weddings, and even family holidays being abandoned at the last minute are numerous. I was shocked to learn that doctors were required to pay substantial fees for professional exams – the very exams required to progress in their chosen fields – and not afforded time for professional development in terms of time off for revision. Perhaps most worrying suggestion in the book is the lack of support for the mental health young professionals whose working day is often quite literally steeped in life and death situations.

By turns this book is laugh-out-loud funny and unbearably poignant. The author’s tone when describing often sensitive situations is normally well-judged but in one instance is regrettable, which is when he describes his least favourite part of his role working in the urogynaecology clinic. As Kay rightly says, we all have aspects of our job we dislike but to describe these patients collectively as ‘a bunch of nans’ who have ‘pelvic floors like quicksand’ seems unnecessarily dismissive, especially in the context of a system in which older women often struggle to be heard. Overall, though, the book is informative, funny, moving, and memorable. It has been warmly received in the press and rightly so. Recommended.

Sara Read is a Lecturer in English at the University of Loughborough and author of Maids, Wives, Widows: Exploring Early Modern Women’s Lives, 1540-1740.