The Perceptions of Pregnancy blog, like the Researchers’ Network, aims to reach beyond boundaries and borders, and to facilitate an international and interdisciplinary conversation on pregnancy and its associated bodily and emotional experiences from the earliest times to the present day. This week, Gabrielle Robilliard writes about 18th-century midwifery in Germany and the clash between male and female practitioners.

If you wanted to edify yourself in 1790s Germany on the history of midwifery, you might have consulted J. G. Krünitz’s Oekonomische Encyklopädie (published 1773–1858), the most comprehensive German-language encyclopaedia of its time, which would have told you that:

For around 100 years in various countries in Europe, but largely in France, England and Holland, and now in many places in Germany, one has greatly improved the art of midwifery, and had few qualms about allowing several men well trained in that art to practise it rather than common midwives: indeed, in many large cities one has appointed several [men] skilled and experienced in this art … especially to provide advice and assistance to pregnant and parturient women and, in emergencies, to provide a helping hand.[1] 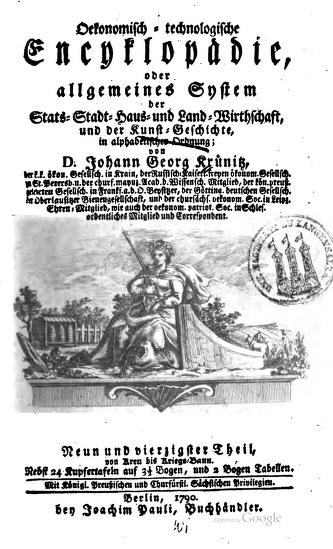 The Krünitz narrative paints a decidedly ‘backward’ picture of midwifery and obstetrics in early and mid-eighteenth-century Germany, a laggard in the trend towards male practitioners in childbirth in the European superpowers of the seventeenth and eighteenth centuries. Moreover, the Krünitz encyclopaedia entry fashions these medical men—when they finally hit the scene ‘now in many places in Germany’—as practitioners to rival and replace the ‘common midwives’.

What this little resumé of the history of male obstetrics in Germany fails to mention is that in some German cities, town councils had been appointing medical officers (at first the town physicians and later special obstetric surgeons) especially responsible for overseeing and—crucially—training sworn midwives and midwife-apprentices since the late seventeenth century. Stark depopulation during the Thirty Years War meant that territorial governments and city councils alike began focusing on reducing maternal and infant mortality. At first efforts concentrated on ensuring a ready supply of midwives, but by the early eighteenth century, the clear focus lay on improving midwife education. At no time in the first half of the eighteenth century was there any move on the part of male practitioners or city councils and territorial governments to replace the midwife with a ‘male-midwife’. By omitting the didactic element of the municipal obstetric surgeon’s tasks and over-emphasising his obstetric practice, the Krünitz narrative served to configure a history that both painted obstetricians as practitioners and furnished them with a permanent place in the birth chamber. Erasing their key role in midwife training was central to this endeavour, for it cleared the way for the male obstetric surgeon to figure as the midwife’s rightful heir to the birth chamber.

In the bustling university and international fair city of Leipzig, the city council appointed a discrete officer in charge of all midwifery and childbirth matters in 1715 and later, in 1731, inaugurated the office of Stadtaccoucheur (municipal obstetric surgeon). Until around the mid-eighteenth-century at least, these male medical officers saw themselves as anything but ‘male-midwives’. Despite increasing and enduring academic interest in midwifery and obstetrics since the Middle Ages, male practitioners had yet to transcend the threshold of ‘uncomplicated’ birth.[2] The limited practice of these early municipal obstetric surgeons focused on ‘difficult births’ (‘schwere Geburten’) resulting largely in embryotomy.[3] The first medical officer in charge of midwifery in Leipzig, Benjamin Benedict Petermann (1680–1724), recalled in his regular report to the Leipzig Council that:

… it was not possible to free these women from their fruits without operating. Hence I was forced, in the presence of the above-mentioned midwife and in particular [in the case of] Mrs Bormann the surgeon Gießen, to carry out a surgical embryotomy, witherto it was finally brought to pass [with the help of] God that under such conditions the children, due to their bad position, [had to be] removed piece by piece because they were already dead anyway.

Mothers and their families were fearful of male intervention, in the words of one midwife ‘the women did not want to have a doctor, [they] would rather die …’[4] However, it was not just this fear that checked male attendance at deliveries. Petermann and his successors were generally averse to surgical intervention. Johann Valentin Hartrauff, appointed in 1731 as the city’s first Stadtaccoucheur, was convinced of the possibility of ‘keeping the life of many a child through [the use of] version’.[5] For Petermann and Hartrauff, childbirth was a natural event and they sought to avoid instruments and surgery.

Thus in 1758 a later Stadtaccoucheur, Johann Gottfried Breuer, expounded the virtues of ‘skilled manual techniques that should be promoted without loss of time’ to prevent ‘mothers and children … to be lost without delivery’, and implored the Leipzig Council to extend midwife lessons to the surrounding countryside.[6] The Stadtaccoucheur’s role, as incumbents saw it, was not so much in practising obstetrics but instead in educating midwives and thus saving the lives of mothers and infants through lessons, consisting largely of anatomical theory. The Stadtaccoucheur was essential in this endeavour because, as Stadtaccoucheur Hartrauff argued, without his enlightened anatomical knowledge of nature, the city’s midwives would resort to superstition.[7] Thus despite vociferous criticism levelled at midwives for their belligerence and botching of deliveries, all the energy devoted to midwife training and the reluctance of these practitioners to practise obstetric surgery served to strengthen the ‘natural’ role of the municipally appointed midwife in Leipzig.

Both the self-image and the authority of these early eighteenth-century municipal obstetric surgeons stemmed more from their role as illuminators and teachers of the ‘nature’ of female anatomy and the ‘natural’ process of childbirth than from their obstetric-surgical activities.

Gabrielle Robilliard completed her PhD in history at the University of Warwick (UK) and is currently a freelance historian, lecturer and translator based in Hamburg. She is author of Tending Mothers and the Fruits of the Womb: The Work of the Midwife in the Early Modern German City, MedGG-Beiheft 64 (Stuttgart: Franz Steiner Verlag, 2017).