In ‘realistic’ young adult (YA) literature, pregnancy is typically treated with disdain. Thus, when narrations of pregnancy do appear in YA literature, they typically portray pregnancy, and subsequent parenthood, as problematic. This refusal to engage pregnancy as anything more than a problem offers a heightened instance of wider discourses in this genre that aim to maintain conservation, hegemonic ideas; to limit adolescent girls’ control over their bodies by telling them that they shouldn’t display sexuality or “sleep around”. This limiting of the body’s sexuality is embedded in contemporary Western culture’s dominant image of acceptable girlhood: the girl is young, fit (both sense of the word) and certainly not pregnant.

Mythopoeic YA fantasy, a vein of what could be termed speculative fiction, is challenging this dominant ideal by offering not only positive narrations of pregnancy but also fantastical ones that question the representational economy—an economy of self through appearance—that is the mechanism behind those limiting ideals. In particular this can be seen in Tamora Pierce’s Daughter of the Lioness duology, a series that follows Alianne (Aly) of Pirates Swoop as she is caught and sold into slavery in the Copper Isles (a foreign country) before ultimately playing a pivotal role in the Isles’ raka-led rebellion against the ruling luarin classes (issues of race are hugely pertinent to this series).

Within this series, Aly meets, marries and mates Nawat Crow, a crow turned man. The narration of her resultant pregnancy begins:

Aly, whose morning sickness extended sometimes to evenings, had contented herself with a mild broth and fruit juices. She looked frequently at the slight swell of her belly, mystified by the thought that another human being was taking shape beneath her navel.1 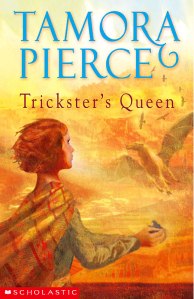 Aly is pregnant — the “morning sickness,” “slight swell to her belly,” not to mention the “human being … taking shape beneath her navel” — make this quite clear, but there is a key difference between the two markers “morning sickness” and “slight swell:” one is a visible, physical change to the body and the other is not. This visibility/invisibility split speaks a conundrum of pregnancy, a tension between the internal (where change is taking place) and the external, where some — and only some — evidence of that change is made available, and it does so by offering the possibility of two, or more, bodies within one body.

Yet, this is fantasy, so this ‘normal’ complicating of appearance — the pregnant body both reveals and conceals and multiplicity — can be taken further, as Aly’s fear that — rather than giving birth to a mortal, human baby — she will deliver eggs, owing to her husband’s heritage (he is a crow, turned man), makes explicit. “‘No eggs no eggs no eggs…’” is Aly’s mantra throughout delivery.2 While a human woman giving birth to eggs is highly improbable within Western consensus reality, the fantasy nature of these tales means that such is possible, if still unlikely. However, whether or not Aly gives birth to eggs is really not the point, the point is: while it is known that Aly is pregnant, the pregnancy does not reveal exactly what is “taking shape beneath her navel.” In the case of this pregnancy—set within a Secondary World whose logic and rational differs from Western consensus reality—Aly may very well give birth to eggs and not a human child.

The pregnant body, both this one within the text as well as ones outside the text, reveals — and conceals — its multiplicity. The representational economy is problematic, particularly in its instance on a one-to-one correlation between self and appearance. On one level, the reliance on sight (appearance is seen) means that—without the ability to breach the barrier that is one’s skin—until the baby is born, her shape is unknown. Thus, while Aly does not, in fact, give birth to eggs, she does, still surprisingly, give birth to triplets: “‘Here’s what’s been causing the trouble!’ Mistress Penolong [the midwife] said with pleasure’… She lifted up a small wriggling body … ‘You have another daughter’”.3 It is has been “trouble” because they, Aly and the midwife, did not know how many babies Aly would have; in the end, a daughter (Ochobai) and a son (Junim) preceded this final baby girl (Ulasu).

While Aly’s pregnancy makes available a certain blurring of the single, stable body, it is a limited blurring, as is the case for all pregnancies. Unless medical technology is employed to see within, the body does not reveal its depth. Here, the limited visibility of the internal illustrates how the body’s surface is not enough for determining self: Aly’s self, while pregnant, has in fact, been comprised of three additional bodies/selves, more than even the “normal” expectations of pregnancy predicted. Pregnancy makes explicit the body’s liminality. It is a threshold both revealing and concealing the depth within.

Yet, Diane’s pregnancy, unlike Aly’s, makes the internal more available on the body’s surface. In this case, she must shape-shift below the waist every time her unborn child does.

Your aunt is having a baby shape-shifter within the month,’ replied her mother. … ‘If she doesn’t change below the waist whenever the child does, it might kick its way out of her womb.’ Alanna shuddered. ‘… it made me queasy to see her go from bear to donkey to fish every now and then, while her upper half remains the same.4